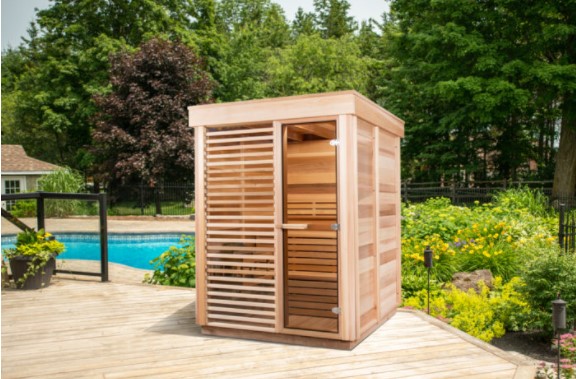 In late summer 2016, an above-ground oval pool was installed at a private home in a small town in rural Ontario. The project’s buttress-free design meant there would be no external A-frame supports. Instead, the walls would be connected with buried tension braces. Although the buttress-free design is more costly than traditional A-frame style wall kits, the homeowner was looking to maximize space and opted to go with the more expensive option.

The pool was the second above-ground install in this exact location; the previous one had been destroyed by a falling branch from a nearby tree that had gone down during a windstorm. The tree was ultimately cut down to a stump, which was 1.2 m (4 ft) in diameter.

In spring 2018, the homeowners hired a professional crew to open the pool. They had done the same the previous year, and had also hired professionals to close it. Upon opening the pool, however, the crew noted a slight depression in the floor near the middle of the deep end that, at first, appeared to be nothing more than a minor inconsistency in the slope.

As the pool was less than two years old, the owner contacted the original installer to alert them to the problem. They were told not to worry about the change in the floor profile, as “sometimes these things happen over the winter.”

After 30 days, the floor had become significantly worse. The depression had become more pronounced and was getting larger. The homeowner followed up with the original contractor multiple times but did not receive a service call or site visit. Rather, the contractor reiterated there was no need for concern, as the liner would “stretch” and was “impervious to damage.” The owner insisted there was a problem and continued to attempt to contact the builder about the situation—up to and including the day the pool failed.

One afternoon, as the owner and their children were swimming, the floor of the deep end abruptly collapsed, ripping the liner and suddenly draining the pool. The force of the drain caused a vortex akin to a flushing toilet and water began escaping from the base of one of the installation’s long walls.

The pool drained in minutes. Water flooded onto the property and eventually into the basement of the home, causing significant damage to the finished interior.

While it drained, the owner waded over to the collapsed floor and was able to insert the handle of a rake to the hilt straight down into the ground, nearly 1.5 m (5 ft). Once emptied, two distinct sinkholes were left in the ground, which were next to each other, but not directly connected. These were not near any wall, nor connected via any visible holes or animal burrows to any of the edges of the pool. Without any clear burrow from the edge to the middle of the pool there is no direct evidence to suggest a burrowing animal or insect.

There were many other observations noted about this unique failure, however:

One comment on “Failure vortex: The case of the mysterious sinkhole”