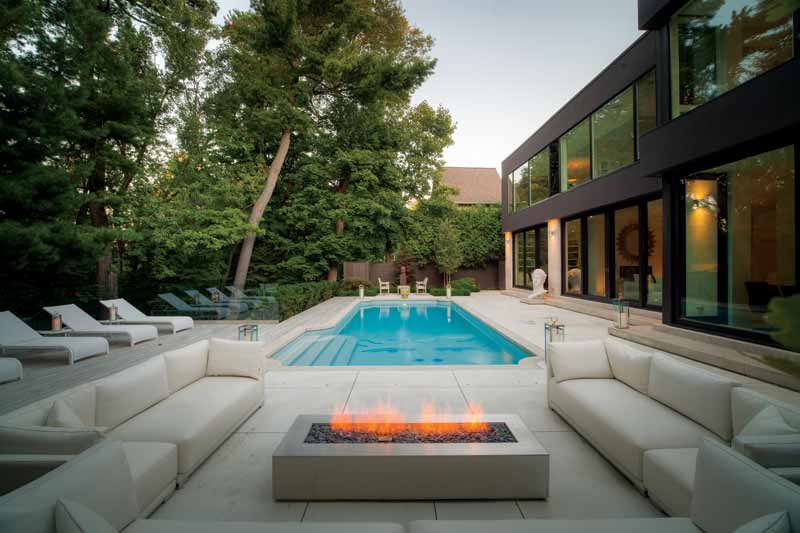 This project in Toronto involved the renovation of the existing natural landscape, which saw it transformed into a modern, classic space with clean distinct lines. The modernism design of the outdoor space pulls from early 20th century art deco influences using both non-traditional and innovative forms of expression.

The project’s focus was to create a lasting space, which not only captured the views and architecture of the newly built home, but also added an extension to the panoramic views of the glass wall the residence offers. To accomplish this, M&S Architectural in Bradford, Ont., needed a blank canvas from which to start; therefore, an existing gunite hot tub and the property’s current landscape had to be completely overhauled. In doing so, sleek, precast 101.6-mm (6-in.) sandstone finished copings and etched concrete slab with an elegant large slab design in the patio were installed.

A pre-existing pressure-treated patio was also removed and replaced with an extended ipe deck which overhangs the ravine the property backs onto. As space was limited due to the city’s Ravine & Natural Feature Protection bylaw, the raised deck allowed for the creation of a large, poolside dining and lounge area complete with a fire table. The use of a tempered glass railing system along the perimeter of the raised patio co-ordinates with the glass walls used in the home’s architecture, while a perimeter screening of plant materials helps to fill the void along the length of the pool, opposite the house.

While the landscape was the main element of the design, renovating the existing 4.8- x 11-m (16- x 36-ft) pool was also integral to the backyard’s overall esthetics. In this case, the interior pool finish, which includes a custom glass-tile mosaic in the shallow end, creates an inviting aquatic oasis, which also contrasts with the hardscaping, muted tones of the décor, and heavy foliage in the background. M&S Architectural completed the architectural concept of the backyard, developed the landscape design, and worked with Betz Pools Ltd., in Stoufville, Ont., to renovate the pool.

You May Also Like  Handcrafted tiles added to pool design software

To complete the look of the property, landscape lighting was strategically installed around the perimeter of the pool deck and in various garden pockets to extend the enjoyment and view of the landscape into the evening.