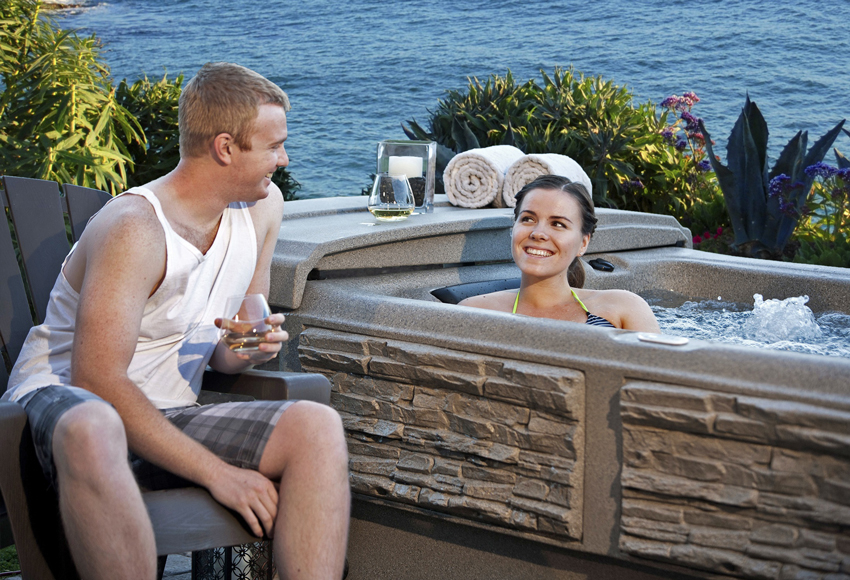 Biofilm is a common word heard in the pool and hot tub industry lately. In the last few years, there has been an increasing amount of information via studies and tests, which can be used to educate industry members and consumers on the subject. In previous articles, there is mention of biofilm existing in wet areas on pool toys and filters etc.; however, there are conclusive tests that show biofilm continues to exist in dry areas within a pool and spa/hot tub’s plumbing and equipment as well. In fact, it will lay dormant and come back to life when it gets wet again.

That said, drain-and-fill whirlpool bathtubs are one of the worst culprits, while spas/hot tubs can also be affected when a ‘wet test’ is performed after it has been taken out of storage and filled with water. While they are in storage, biofilm and bacteria grows in the interim.

This poses the question: when most consumers get a new hot tub is it really clean? It may look clean and have clean filters, but there are many areas within the hot tub that are hidden. This is just the beginning. Not only can dormant biofilm reactivate, but it will continue to harbour and colonize bacteria once it is filled with water.

According to Wikipedia, biofilm is defined as: Any group of micro-organisms in which cells stick to each other on a surface is considered a biofilm. The cells are frequently embedded within a self-produced matrix of extracellular polymeric substance (EPS). Biofilm EPS, which is also referred to as slime (although not everything described as slime is a biofilm), is a polymeric conglomeration generally composed of extracellular DNA, proteins, and polysaccharides. Biofilms may form on living or non-living surfaces and can be prevalent in natural, industrial, and hospital settings.

The microbial cells growing in a biofilm are physiologically distinct from planktonic cells of the same organism, which, by contrast, are single-cells that may float or swim in a liquid medium.

Microbes form a biofilm in response to many factors, which may include cellular recognition of specific or non-specific attachment sites on a surface, nutritional cues, or in some cases, by exposure  of planktonic cells to sub-inhibitory concentrations of antibiotics. When a cell switches to the biofilm mode of growth, it undergoes a phenotypic shift in behaviour in which large suites of genes are differentially regulated. One study by a Texas A&M University microbiologist explains how whirlpool bathtubs can become a breeding ground for bacteria, many of them potential pathogens, and as such the water can be the epicentre for infectious diseases.

As part of this study, conducted by Rita B. Moyes, PhD, 43 water samples from whirlpool bathtubs—both private and residential—were subjected to bacterial analysis within 24 hours of collection. Aseptic technique was used to collect both tap and whirlpool bathtub water samples into sterile 100-ml (3.3-oz) collection containers with sodium thiosulfate (Na2S2O3) tablets for chlorine (Cl) inactivation. One container of tap water was collected after running the water for one to two minutes and four containers of whirlpool bathtub water was collected after a clean tub was filled and the jets were engaged for two to three minutes.

Bacteriological examinations first involved nutrient agar pour plates of water dilutions to assess relative bacterial numbers. This involved passing 100 ml (3.3 oz) of water through nitrocellulose membrane filters with a 0.45-μm pore size. Then, the filters were aseptically placed on Eosin Methylene Blue (EMB) agar, Mannitol Salts Agar (MSA), Pseudomonas Fagar, Buffered Cysteine Yeast Extract (BCYE) agar, and Sabaroud Dextrose Agar. All plates were incubated for 24 to 48 hours (72 hours for BCYE plates) at 37 C (98.6 F) except for EMB agar, which was incubated at 44 C (111.2 F). By elevating the incubation temperature for this group, many of the non- enteric coliforms are eliminated.

The study’s results also showed all whirlpool bathtub samples yielded microbial growth, whereas 68 per cent of the tap water samples showed no growth under the experimental conditions used in this trial. No data correlating the number of viable organisms in water with the risk of acquiring infection is currently available. However, the analysis of 100-ml (3.3-oz) filtered samples yielded too numerous to count or greater than 300 colony-forming units (CFUs) in 61 per cent of the whirlpool bathtub samples tested, indicating the bacterial load for a 100-ml (3.3-oz) sample was fairly high in a majority of cases.