Two, 757-L (200-gal) tanks were used, along with a challenge load, to make both systems built with the same filtration fabric, equally dirty. Identical equipment set-ups (i.e. same variable-speed pump (VSP), flow rates, plumbing layout), with the exception of the filter tanks, were plumbed to each tank. A turbidity meter, which measures the cloudiness of water, was used to confirm the starting turbidity of each test tank. The starting Formazin Turbidity Units (FTU) should be identical for both test rigs before the start of the experiment. The filter systems were allowed to run until they achieved the desired turbidity value.

The challenge water consisted of dirt, DE, and oils and the result contradicted the ‘more is better’ approach (see Figure 1 below). 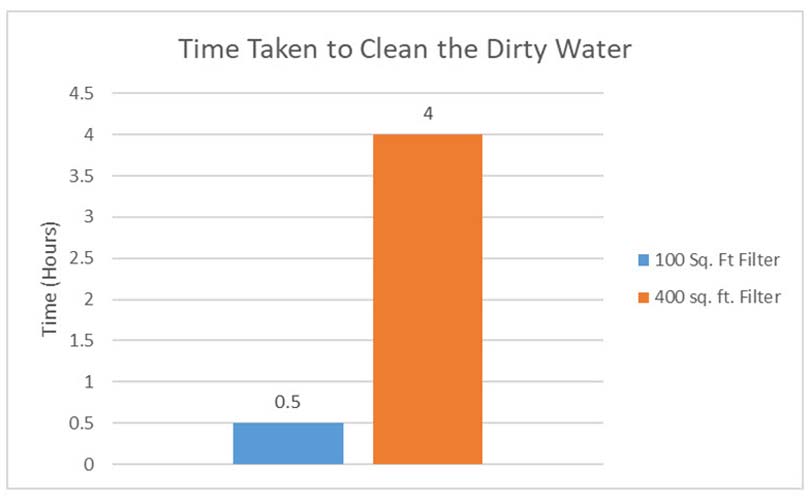 When considering the amount of filtration media, ‘System A’ was able to clear the challenge water faster than its counterpart ‘System B.’ This is because the 9.3-m2 (100-sf) filter could build filter cake very quickly compared to the 37-m2 (400-sf) filter elements. Once filter cake develops on the surface of the filtration material, it is able to capture finer dirt particles more efficiently.

Customers or technicians do not want to service filters frequently. The industry standard is to service the filter (via either cartridge cleaning or backwashing) once the pressure on the filtration system has increased by 8 psi over the starting pressure. It is a given that as the filters are soiled, the pressure on the system increases and flow rate through the system decreases.

For this test, both systems were gradually loaded to increase the pressure using the same challenge load, which comprised roughly 0.2 kg (0.5 lbs) of a mixture of dirt and oils.

As one will see when evaluating a cartridge filtration system, having more media certainly delivers a greater amount of overall dirt holding capacity (see Figure 2 below). DE and sand filters are relatively fixed in their geometries (tank cross sectional area for sand and grid size for DE grids) so the amount of debris captured remains relatively the same.

You May Also Like  A case for borates: Maintaining water chemistry in pools using salt chlorine generators 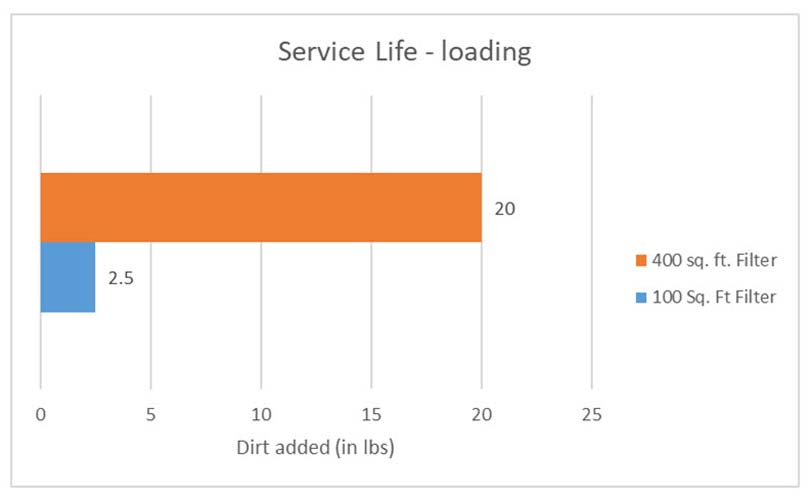